The weekend, and a trip across London to Alexandra Palace to visit VeganLifeLive. 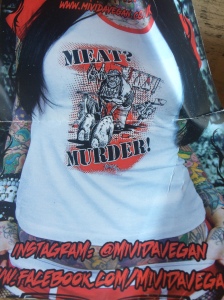 I was looking forward to visiting VeganLifeLive at Ally Pally on Saturday.  As it turned out, it was a wet and miserable day and it took an effort of will to leave the flat, let alone traverse London to the northern swings of Islington.  But I’m glad we did.  VeganLifeLive was packed full of vibrant stands and stalls offering all sorts of new tastes and experiences designed to fit with veganism.  We were greeted nicely, and with limitless free bottled water. 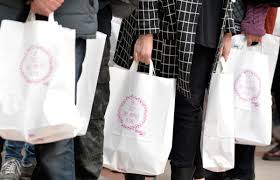 Goodie bags for the queuers at Vegan Life Live 2018

There were goodie bags on offer but we declined the long queue in favour of quick access to the exhibition area.  Unfortunately the key speaker we were most keen to hear, Paul Captain Watson, was a no-show but there was enough else going on to keep us happy and interested for a good few hours.

Food and drink were the definite stars of the show, with lots of new tastes and fresh combinations on offer. Our favourites were a vanilla fudge that really did taste fudgy (so much vegan fudge doesn’t) and the wonderful range of  African-inspired chutneys and hot sauces from the rather wonderful Madame Sunshine.  Madame Sunshine claims to be ‘on this earth to make food that brings a smile to your face’.  She certainly did that for us.  Her sweet chilli chutney packed out our morning baguettes the next day!  The expected exhibitors, such as Abel & Cole with their home-delivered veggie boxes, were there too.  Next to a marvellous little tea stand, offering refreshing  samples of a range of green teas – including one that had the distinct flavour of a black tea – and a delightful selection of teapots and ceramic cups.

There were some exhibitors outside the food and drink area – one offering  high end vegan shoes (which all looked like leather to me), several vegan clothing retailers, a travel operator offering vegan cruises and tours and the such like.  The enormous hall was packed, and it would have been easy to become stressed among the crowds and jostling, but there were massages on offer and singers and entertainers to keep one calm and happy.  I listened to a an intriguing talk and cookery demo from a small company making seitan – a wheat protein which looks and tastes shockingly similar to meat when cooked. I didn’t like the product but the guys behind it had interesting stories to tell.

All in all though, it was an exhibition which lacked the festival atmosphere we’d been expecting.  There was little on offer to help explore the pros and cons of veganism and almost nothing to encourage activism or community engagement.  I suspect even those in search of basic facts on the impact of veganism would have left disappointed.  I didn’t – revived by tea and Madame Sunshine, and sustained with a fabulous Ethiopian curry at lunchtime, I came home happily clutching fudge and tea and hot sauces.  But VeganLifeLive was a missed opportunity to expand the vegan mind and settled for being a trade fair for the already enlightened.

Every morning, as I get off the 93 bus outside Centre Court shopping centre on my way to Wimbledon station, I see the sculptured statute of two ladies who have become known among my friends as ‘the two fat ladies’.  They always make me smile.  They are so confident, so present and yet playful.  Set as if determined to shop the heck out of all rivals, their wry, sparse features speak of voluminous thoughts just as their bare and barren shapes hint at desire and voluptuousness.  Today, on a whim, I took a photo of my two fat ladies and posted it on twitter, sparking a wee conversation about their history.

The eight foot sculpture is apparently more properly call Walking Woman, although it seems that Two Fat Ladies is common parlance among local residents.  It is a local landmark and a popular meeting up point.

The statue is the work of artist Andre Wallace.  You can see more of Wallace’s work, of which the Walking Woman sculpture seems quite typical, on his own website.  Our lovely ladies were first unveiled at the official opening of Centre Court shopping centre in September 1992, when they were positioned at the top of a set of steps and had a different orientation.   They were temporarily removed twenty years later, while Wimbledon Station forecourt was having a face lift, but were returned to their home, inspiring Wimbledon shoppers, in June 2012.

At the tender age of 16, Joseph Ely is said to have walked from his home in Essex to London to seek his fortune.  Once in London, he spent some time working for others but wanted to strke out for himself.  To work out where to set up his stall, he stood on street corners counting the number of people who passed by each hour.  He settled on Alexandra Road, at the bottom of Wimbledon Hill, and soon after, in 1876, “Elys” opened its doors, as a tailor and outfitter, selling drapery as well.

10 years later in 1886, in need of more space to cater better for Wimbledon’s growing suburban population, Joseph moved his shop to its current site on Worple Road.  It would then have been a close neighbour to the All England Croquet and Lawn Tennis Club which was a little further down Worple Road until it moved up the hill to Church Road in 1922.

In the late 19th century, Wimbledon Council refused to pay the high prices charged by the local gas company for street lighting, sticking with oil lamps until electricity became an option in 1900 (see the Wimbledon Society’s Newsletter for March 2011).  Joseph Ely, however, managed to reduce the lighting bill for his ‘Emporium’, as he called it, from £220 to £70 a year but switching to gas mantles in 1894.  With such practices, Elys thrived, especially after 1907 when the tram was extended to Wimbledon, bringing more customers from Raynes Park and New Malden: Joseph induced bus and tram conductors to shout ‘Elys Corner’ as the they went past his store. 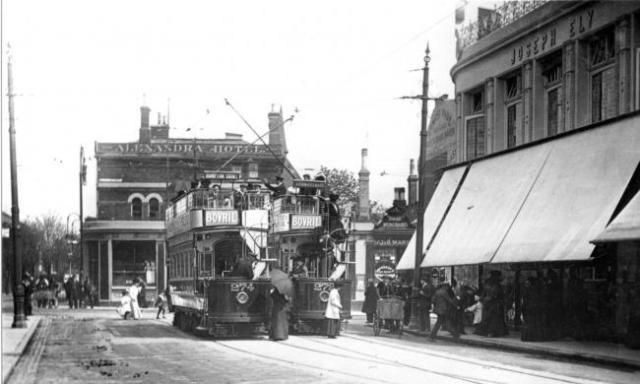 Crowds gathered in front of the store on Worple Road, at Elys Corner, to watch Joseph Ely’s funeral procession when he died in 1910. 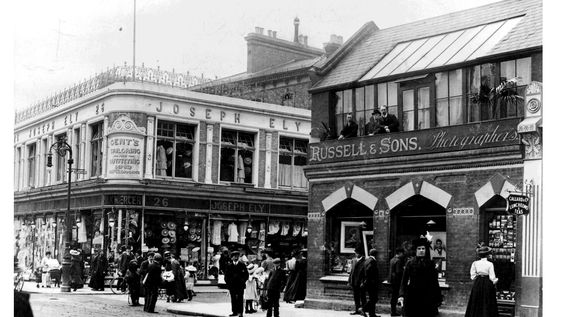 Joseph’s son, Bernard, led Elys from 1910 until his own death in 1957.  Elys became a limited company in 1936, 60 years after its founding.  Funds raised from shareholders paid for a new store front.

Troops marching up Wimbledon Hill Road during the early days of the First World War.  Elys can be seen behind the ‘Dunhill’ omnibus.

Elys expanded further into adjacent vacant plots throughout the 1960s and the original store buildings were rebuilt.

This advert for Elys – ‘such a friendly kind of store’ – appeared in a local school’s concert programme in July 1960.  I’m guess the following picture of one of Elys’ vans, advertising removals and export services, dates from much the same time. 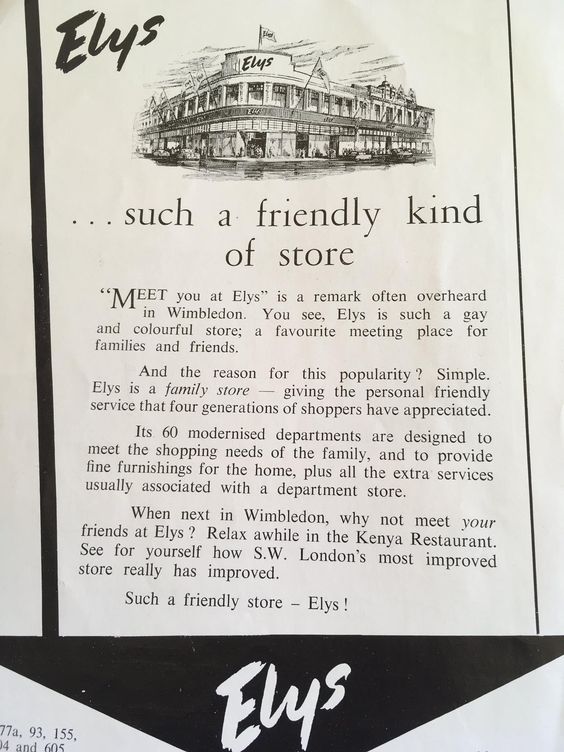 ‘Meet You At Elys’ 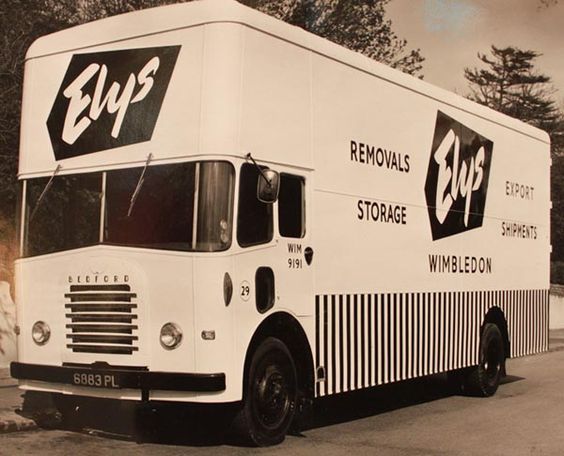 Elys was purchased by the Morleys Stores Group in 1996, who gave the store a major refurbishment, giving it largely the shape and presence it has today.